My WDYTYA - Uncle Andy and the Old Man's Draft Registration 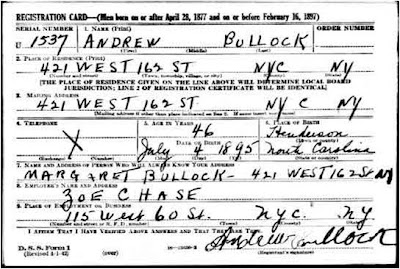 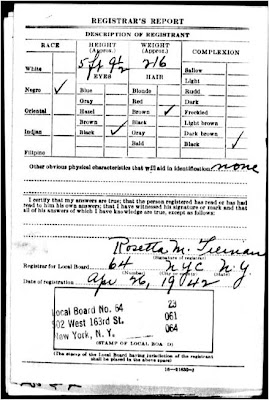 Posted by Professor Dru at 5:47 PM

Congratulations on your find for Uncle Andrew. I want to alert you that the 'old man's draft' is also located on Family search Pilot AKA Labs. Go to family search.org, Hit the link that says "See the Prototype for searching Millions of records".

You can also see the list of record types they have there, ie Ohio Death Records.. By clicking "Search or Browse our Record Collections". The 'old man's draft' is listed there as US Military... Just to verify Uncle Andy was there bc some states, like Georgia for one, were destroyed. So are not included. As I searched for Uncle A in each burrough, I saw that some of the images were unavailable. I supposed your Uncle Andrew could be, coincidentally the first one in that stack of unavailable images in Manhattan. Check that out. I THINK they were doing server maintenance last weekend. Maybe it will come up tomorrow. The unavailable pages I was seeking last weekend did come up this evening.

I'm looking forward to the next episode.

Excellent info Dru! I decided to see if I could locate any relatives and found my grea great-grandfather's brother Ruben Johnson who moved from Texas to California.

Congratulations on your new finding, Terrence.

Thanks for the info about the other websites.