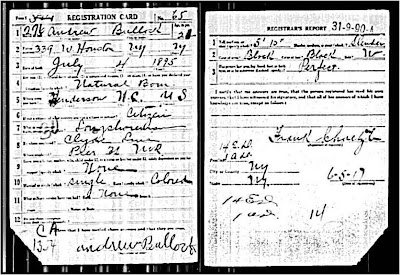 I found Uncle Andy B’s 1917 military draft registraton card on Ancestry.com several years ago. This draft registration card provides invaluable information about Uncle Andy B. as well as raises some questions such as the age discrepancy.

Age Discrepancies
This 1917 registration draft was for men ages 21 to 31. Uncle Andy B’s card indicates that he was 21-years-old and born in 1895, instead of 1899 as indicated on the 1900 census. If 1899 was his actual birth year, then Uncle Andy B. was actually 17-years-old when he filled on this card on June 5th which was a little less than a month before his 18th birthday on the 4th of July in 1917. (Read more about the 1900 census findings). Other documents found so far, except for the 1900 census, indicate a birth year of 1895 or 1896. I still believe the earlier birth year from the census is more accurate. (The birth year discrepancy will be discussed more indepth in a future blog posting.)

Posted by Professor Dru at 1:06 PM

Great posting about draft cards. They are a good source of information about male ancestors. It gives a closer look on the details about them. Thanks for posting this useful information.

The age discrepancy makes sense if he was trying to get into the Armed Services. He would lie about his age.

I agree, the 1900 census record is probably the more accurate; since it's the closest to an actual event - namely birth.

My mantra which I learned from genealogist Beth Wilson:

WHO said it?
WHEN did they say it?
& HOW did they know?