The African Americans: Many Rivers to Cross – Episode One – Soul Food and Grandma's Spam Soup

There were many things covered in episode one of The African Americans:  Many Rivers to Cross, in which I am inspired to write about.  In this posting, I will discuss my thoughts about the conversation about food and food traditions between Professor Henry Louis Gates and Culinary Historian Michael Twitty.

I loved watching this segment which opened with Professor Gates and Mr. Twitty walking towards the garden as Mr. Twitty began the conversation saying that the garden “signifies crops that enslaved African Americans would have grown.”  Professor Gates’ response that “the most enduring expressions of any culture is food” and about people being able “to access the world of ancestors by tasting it” perked my interest and I began to think about food and cooking traditions in my own family.  In my immediate family (my three sisters and I), food and cooking traditions were primarily passed down to us from our maternal grandmother.  Although the time period for episode one of Many Rivers to Cross was from 1500-1800, my thoughts about food traditions and cooking focused on what this meant to me during my lifetime.

Grandma’s Cooking
In 2011, when my grandmother Emma died, I wanted her funeral program to include more information about her beyond vital facts about birth, marriage, or death.  One of the things I did as I prepared to write her funeral program was to talk to three generations of my family about their memories of her.  This included her children (my aunt and uncle), my sisters and first cousins, and some of the great-grandchildren of my grandmother.  The common theme and memories from all three generations was about the foods she cooked.  As a result, I included this statement in the narrative of her funeral program.

One of my favorite memories of my grandmother’s cooking is her homemade biscuits.  (click here for that story)

Grandma’s Spam Soup
In another part of the food conversation, Michael Twitty mentioned to Professor Gates that he had found a reference which quoted the wife of a former Virginia governor to have said “No one bakes a ham better than a big, fat negro Mammy”.  Rather than taking offense to this, Mr. Twitty and Professor Gates put the comment in a positive and complimentary perspective as they stood near the stalk of sorghum.

Twitty:  But somehow we got our hands in the sugarcane.
Gates:  And our ancestors blackified it:
Twitty:  We blackified it--we took everything and made it better, made it more soulful…

This part of the conversation about putting the “blackified” or “soul” touch on food ignited my memories about my grandmother’s creative cooking methods and her spam soup.  Grandma’s family was poor and she also grew up during the Great Depression so I’m sure she learned some of this cooking creativity from her mother and other ancestors.  I remember one cold winter when food in the house was low and Grandma made a large pot of homemade soup.  Typically she included some type of meat in her soup such as chicken, turkey, or beef.  However, she did not have any meat in the house and no money to even buy meat from the store.  The closest thing she had to meat was a can of spam which someone had given her.  So along with her blending various types of fresh and canned vegetables to make the soup, Grandma cut the spam into chunks and threw them in the pot.  Talk about delicious!


In episode one, Professor Gates talked about slave cooks “crafting a distinct African American cuisine.”  Well, I must say that my grandmother’s spam soup, biscuits, and other meals were definitely “distinct African American cuisines.”  In the Bible, Jesus performed a miracle when he used two fish and five loaves of bread to feed a large crowd of over five thousand people.  During my lifetime, I witnessed my grandmother working quite a few meal miracles as she took what little she had to make a tasty meal.

My Cooking and Eating Practices Today
In the last two years, I have had to radically change my cooking and eating practices to improve my health.  Although my cooking methods are drastically different from my grandmother and other ancestors, I have learned through studying various recipes and by trial and error how to get some of the tastes of the past without the high salt, sugar, or fat that would have been used by my ancestors to “craft their distinct African American cuisines.

The African Americans: Many Rivers To Cross Series

The Many Rivers to Cross Series
This six part series covers 500 year of African American history and explores “the risks they took and the mountains they scaled.”  African American history, literature, and music are full of references to “rivers” and other bodies of water.  In some of these references, “rivers” are a barrier in between slavery and freedom.  Whether traveling on foot, by wagon or boat, reaching the other side of the river is often symbolic with success and victory.

Episodes and Time Periods of Many Rivers to Cross

My Initial Thoughts About the Many Rivers to Cross Series
When I first learned about the “Many Rivers to Cross” series, I first thought about my African ancestors who survived the long voyage from Africa to American.  Many did not survive the journey, but although I do not know their names, I know that my ancestors survived.  The proof of their survival is ME!  After thinking about my African ancestors for a bit, my mind drifted back to more recent history—that is, my ancestors who migrated from small towns in Virginia and North Carolina in the early 20th century to larger cities in the North and South.  They too crossed a “many rivers” in order to move to new lands for a better life.

The African-Americans Many Rivers to Cross Trailer 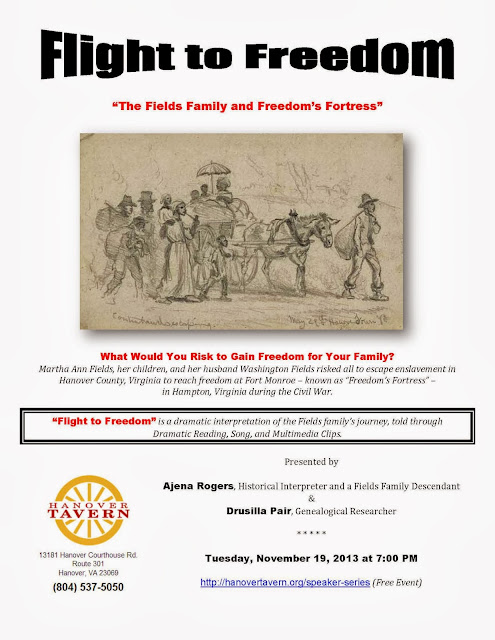 Posted by Professor Dru at 6:13 PM No comments: