A Providence Family Connection Through DNA

I am excited to report that I recently discovered a DNA match who is likely kin to me on my PROVIDENCE family line. My PROVIDENCE ancestry comes through a great-great grandmother, Ersie Jane PROVIDENCE ROBINSON (abt. 1850-bef. 1910) on my father's side. Grandma Ersie Jane lived in Greensville County, Virginia. She married my great-great grandfather Joshua ROBINSON in Greensville County, Virginia on June 9, 1867. Discovering more about my PROVIDENCE ancestry has been achieved by a combination of oral history, document research, and now DNA.

ORAL HISTORY
I initially learned of Grandma Ersie Jane through oral history in 1995 and 1996 which came from conversations with four siblings of my paternal grandmother Hattie MOORE PAIR (1902-1956): Samuel "Channie" MOORE, Charlie "Jack" MOORE, Washington MOORE, and Della MOORE RICHARDSON. During my initial conversations with my great aunt and three great uncles, who were born between 1900 and 1917, they gave me names of both sets of grandparents and other family members. They did not know Grandma Ersie, but heard about her from their parents and others. Later,I also had conversations with other grandchildren of Grandma Ersie Jane and Grandpa Joshua and gathered and wrote their memories of their grandparents.


DOCUMENT RESEARCH
After gathering oral history from my great aunt, great uncles, and other grandchildren of Joshua and Ersie Jane PROVIDENCE ROBINSON, I began searching documents such as marriage licenses, death certificates, and the census on the people they named.

Research of documents can verify or dispute oral history as well provide new ancestral information. Much of this research was done in the late 1990s when there were not many resources on the Internet. I spent many hours gathering family history documents the old school way at libraries and courthouses. As I gathered documents on my family, I shared my findings with Grandma Ersie Jane's grandchildren and other family members through conversations as well as in the writing of letters, newsletters, and family reunion books.


DNA
My recently discovered PROVIDENCE DNA match and I both took autosomal DNA tests through Ancestry DNA.  This test analyzed the 22 pairs of chromosomes we inherited from each of our our parents. The results according to Ancestry DNA indicate that we share 27.5 centimorgans across two DNA segments and that we are fourth cousins. It helps to possibly make some type of definite family connection if both parties know names of their ancestors. Since my PROVIDENCE DNA match has a family tree on the the Ancestry DNA website, it enabled me to see that the PROVIDENCE surname is common in both our our ancestral lines.

The DNA kit of this new match is being managed by her son and I sent him a message via Ancestry's site earlier this week. Thankfully he responded and I look forward to our journey together to piece together our family history.

Genealogy is a continual process of working from the known to the unknown. The known for me through oral history and document research is that I had a great-great grandmother named Ersie Jane PROVIDENCE ROBINSON of Greensville County, Virginia, the daughter of John and Eliza PROVIDENCE. John and Eliza had at least two other children: Lucretia and Matthew. Matthew PROVIDENCE had least two sons: John and William. Matthew's son John was born around 1897 in North Carolina and died in 1952 in Portsmouth, Virginia.

The known of the family tree of my PROVIDENCE DNA match indicates that the maiden name of her maternal grandmother Gentelia was PROVIDENCE and that Gentelia's father was named John PROVIDENCE who was born around 1904 and lived in Southampton County, Virginia in 1930.

It does not appear that John, the son of Matthew and the John PROVIDENCE ancestor of my DNA match were the same person. However, there are numerous other men named "John PROVIDENCE" living in Virginia and North Carolina during the same time as the other two Johns mentioned above.

FINAL THOUGHTS
Genealogy is a continual process of working from the known to the unknown and I look forward to discovering more about my PROVIDENCE ancestry and making family connections with living descendants through oral history, document research, and DNA.
.
Posted by Professor Dru at 6:58 AM 3 comments: 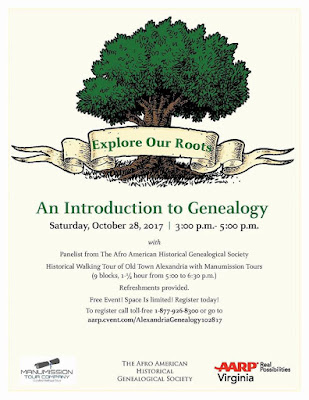 I'm looking forward to participating as a panelist at this event, along with Ressie Luck, Renate Yarborough-Sanders, and Char McCargo Bah today in Alexandria, Virginia.
Posted by Professor Dru at 5:42 AM No comments:

Travel Tuesday: Plans to Visit the Library of Congress


“Travel Tuesday”  is a daily blogging prompt listed on the site of Thomas MacEntee of Geneabloggers. This blog topic was suggested by Susan Donaldson of Family History Fun. The “Travel Tuesday” daily blog prompt is described as follows:

Do you have images, quotes or stories about trips your ancestors or family took during their lives? Or have to ventured out on travels to your ancestral homeland as part of your genealogy research?

MY “TRAVEL TUESDAY” BLOG PLANS
This blog prompt has given me quite a few ideas about genealogy travel. In addition to the ideas mentioned above, I plan to write “Travel Tuesday” blog postings about "plans for future trips and reports on activities of the actual trip to research repositories and historic sites, both local and distant." I am fortunate to live within driving distance from numerous research repositories and historical sites which I believe will be of interest to the genealogy community. I also hope that writing about my future genealogy travel plans will keep me more focused when I get the opportunity to visit these places.

PLANS FOR VISITING THE LIBRARY OF CONGRESS
I will begin my first “Travel Tuesday” blog posting with writing up plans to visit the Library of Congress in Washington, DC sometime in the near future. I can either drive or take the train.

In preparation for this visit, I decided to research this library via YouTube and the Library of Congress website. As a result of this research, I would like to do the following during my visit:

I plan to blog about my visit and hope that this will help other genealogists who visit the Library of Congress in the future.

For additional information about the Library of Congress, see links and videos below:


How to Find Stuff at the Largest Library in the World

The Main Reading Room of the Library of Congress

The Library of Congress Is Your Library

Inside the Library of Congress

Sacred Sunday: Easter Fashions of the Past

Today, I'm making a commitment to begin blogging again. One of the series I began in 2008 was called "Sacred Sunday" which highlights religious and church history and traditions.


============
This is one of my favorite photos of my maternal grandmother, Emma Johnson Thornton (1922-2011) because it represents Easter fashions of the past when women wore hats and gloves to church.  The lady on the left was Sister Odell Hayes (1926-1994) who was a member of my family's church,  The photo was taken sometime during the 1950s in front of our family's church, Gospel Light United Holy Church, Inc., located in Newport News, Virginia, when my mother was a child.

The women of Gospel Light not only wore hats on Easter, but on every Sunday because they believed the scriptures in the Bible written by the Apostle Paul in 1 Corinthians 11: 4-5, which states: "Every man praying or prophesying, having his head covered, dishonoureth his head.  But every woman that prayeth or prophesieth with her head uncovered dishonoureth her head: for that is even all one as if she were shaven." I’m not sure where the tradition of wearing white gloves originated.
Posted by Professor Dru at 1:04 PM No comments: