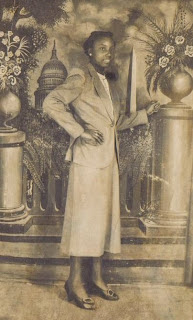 Eighty-one years ago on March 31, 1927, my great Aunt Mary Johnson was born in Warren County, NC to my great-grandparents George and Bell Bullock Johnson. Aunt Mary never married, nor had any children, but she was a devoted Aunt to her nieces and nephews. From her, I learned that the role of the unmarried childless aunt was to help financially and otherwise with the nieces and nephews. I have done the same as Aunt Mary since I became an Aunt in 1981.

I was not around Aunt Mary that much, but we communicated through letters. Unfortunately I don’t have any of those letters now. She also gave me money when my family couldn’t afford things such as my high school class ring and things needed for high school graduation. I have been told by older cousins that she also helped them financially when they were growing up.

My cousins and I miss her and talk about her often. Gone but not forgotten.
Posted by Professor Dru at 6:27 AM 1 comment:

Email ThisBlogThis!Share to TwitterShare to FacebookShare to Pinterest
Labels: Birthdays 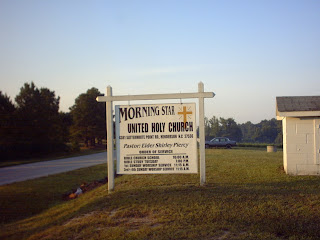 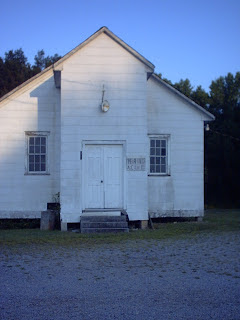 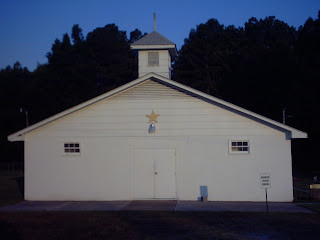 Posted by Professor Dru at 9:23 AM No comments: On February 11, 1914, Grandma Bell married George Johnson (1893-1932,) the youngest son of Plummer Johnson (1846-1917) and Susie Jerman Johnson (1858-1939) of Ridgeway, NC. Grandma Bell settled in Ridgeway and remained there the remainder of her life. Her husband’s ancestors lived in Ridgeway for many years possibly dating back before the Civil War

On February 28, 1932, during the Great Depression, Grandma Bell’s husband died leaving her with four children and pregnant with another. After the birth of their son on April 30, 1932, her mother Luvenia took care of her three youngest children. Grandma Bell returned to Ridgeway and worked as a Cook for Charlie Herring, the son of German immigrants in Ridgeway. Her two oldest sons, Willie and Charlie, were ages 12 and 14 at the death of their father. They returned to Ridgeway with their mother and worked to help support the family.

Like her mother Luvenia, Grandma Bell was a strong believer in holy living and faith healing. She was a member of Pentecostal Holiness churches and testified of being “saved, sanctified, and filled with the Holy Ghost.” In 1912, she became a founding member of Union Chapel Holy Church. Prior to that she was a member of Morning Star Holy Church in Middleburg area of Vance County. She believed strongly in the ministry of Oral Roberts, an Oklahoma evangelist, and his teachings on faith and healing. She didn’t believe in watching television except to watch Oral Roberts. She only used her radio to listen to Oral Roberts and other religious broadcasts. Grandma Bell believed in keeping the Sabbath holy, which meant not doing any work or cooking on Sundays. She hated listening to gossip and would tune it out by humming a song.

When interviewed in 1980 by a reporter for a church publication about her life, Grandma Bell said, “I don’t want my light to get dull, I want my light to shine bright so men can see the good works and glorify the Father. I ain’t got no bad works, but I want my light to shine bright. I let my light shine so that black and white can see Jesus in me.”
Grandma Bell Bullock Johnson died on July 4, 1982 in the Warren General Hospital located in Warren County, NC. Her funeral was held on July 9, 1982 at Union Chapel Holy Church, Ridgeway, NC and she was buried in the church cemetery.
Posted by Professor Dru at 6:41 AM No comments:

My maternal grandfather believed in punctuality and rising early everyday. Even after his retirement in 1975, he continued to rise early around 5 a.m. daily. When I was a teenager, I started sleeping in the den downstairs because I was tired of sharing a room with my three sisters. Around 5 a.m. every morning, Granddaddy would come downstairs. It was the same ritual every morning: the sound of a coffee pot whistling, the smell of strong Maxwell House coffee, hearing him talk to himself and praying, and his loud irritating slurping sounds. He liked to place his coffee cup on a saucer. He would pour the coffee until it spilled from the cup into the saucer and sip it making a loud slurping sound. All of this noise disturbed my last winks of sleep before getting up for school and I would usually go upstairs angered at al the commotion.

Sometimes as I passed Granddaddy on my way upstairs, I would observe Granddaddy praying. I can still see him now, his tall, large frame and brown bald head leaning, with his elbow resting on the buffet in the dining room. I could never understand what he was saying because it all

Email ThisBlogThis!Share to TwitterShare to FacebookShare to Pinterest
Labels: Granddaddy

Happy Easter to Everyone! Today I pulled out some family Easter photos from the 1960s. This is my mother Dorothy and her brother John when they were teenagers standing in front of their house in Newport News, VA. Photo was probably taken in the early 1960s. I love the hat and gloves that Mama is wearing. 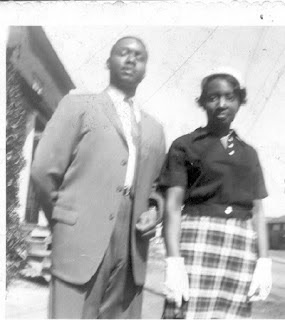 This photo was also taken during the 1960s of some of my mother’s first cousins on Easter Sunday in front of their home in Newark, NJ. Front row (left to right): Phyllis and George. Back Row (left to right): Carolyn and Brenda. These children are now in their late 40s and early 50s. 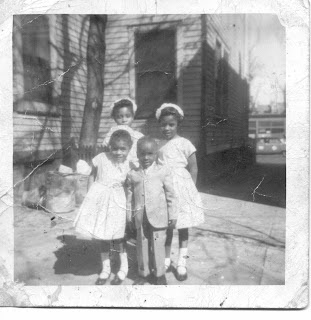 Tribute to my Favorite Ancestor

This tribute was printed in the 100th Anniversary Sourvenir Journal of the Saints Delight Holy Church, Vance County, NC in February 2007.

Tribute
Luvenia Jeffress Bullock
“Holy Venia”
(1864 – 1951)
Every since I was a little girl, I remember your granddaughter Emma 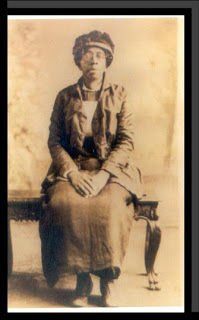 Johnson Thornton (my maternal grandmother), telling me about the way you entered the church shouting “Holy, Holy, Holy!” and about the bonnets, long skirts and dress, and lace-up boots you wore. Although I was born 12 years after your death, I have gotten to know you through listening to the memories of several of your grandchildren and others who knew you, and by studying the numerous legal papers left on this earth documenting your existence.

Many people still recall your grand entrance into Saints Delight and Morning Star holiness churches. Some say you began your shout of “Holy!” as soon as you stepped on the church ground, then you would stomp at the church door, and dance down the aisle speaking in tongues or shouting “Holy!” If the spirit of praise had died down in the church before your arrival, many say that it would certainly liven up when you arrived. When you got to your seat, they say that you would always kneel and pray.

I have also spent many hours during the past 12 years studying your life through legal papers in Warren and Vance counties and have learned that you were born during the Civil War to slaves Green and Ella Scott Jeffress; in 1882 you married Andrew Bullock, the son of Ottoway and Mimmy Bullock, and to this union were born ten children--Mollie, John, James, Bell (my great-grandmother), Channie, Mima, Nancy, Andrew, Bessie, and Joseph; you served the Vance County community as a Midwife from 1920 to 1937 delivering over 300 babies; in your old age, you had a church built next to your home and called it Veanus Chapel House of Prayer, and that the land where you lived is now part of the Kerr Lake and Bullocksville Park area.

Thank you Grandma Ven for living a life of holiness and dedication to God, for the prayers you prayed, and for the spiritual legacy you have left for our family and others to follow.

Purpose of Find Your Folks Blog 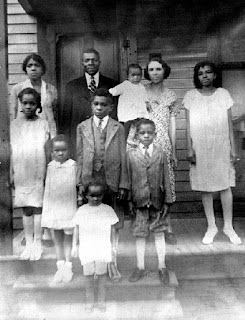 Photo: My Uncle Oscar Bullock and family. Oscar Bullock was a brother of my great-great grandfather Andrew Bullock. Photo taken about 1929 in Norfolk, VA.
The Find Your Folks blog is a journal of my family history pursuits and will also serve as a vehicle for writing, sharing, and analyzing the histories of my various family branches and others in the communities I have been researching. Various topics will be discussed in this blog including the following:

My pursuit of family history began on the first Sunday afternoon in November 1994. Prior to this time, three events influenced me to want to know more about my family history. These events will be discussed more in depth in future postings in this blog.

I thought I would be finished researching by now, but 13 years later, I am still pursuing my history. Through this pursuit, I have met so many people, both face-to-face and online. I never cared too much about history when I was in school, but now history has taken on a different meaning and I now understand its meaning and purpose.