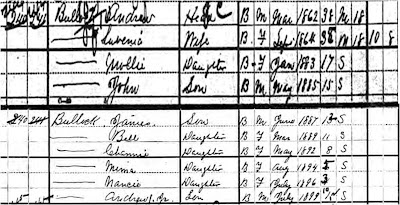 Where Did I Obtain Census?
Early on in my research after 1994, I looked at the census on microfilm for my NC and VA ancestors at my local library. Later, probably sometimes after the year 2000, I obtained a subscription to Ancestry.com and was therefore able to look at these census pages online.

1900 Census
On the 1900 census, Andrew, Jr. aka Uncle Andy B. was the youngest of eight children living in the household of his parents Andrew and Luvenia Bullock in the Nutbush township of Warren County, NC. The eight children ranged in ages from 10 months to 17 years old. The birth month and year of Uncle Andy B. was listed as July 1899. While all other accounts of his birth indicate a birth month of July, the reported birth years on various documents range from 1895 to 1899.

The 1900 census also indicates that Uncle Andy B’s parents had been married for 18 years. This led to the discovery of a marriage license (February 8, 1882) in Warren County, NC for Andrew Bullock, son of Ottoway and Mimmy Bullock, to Luvenia Jeffress, daughter of Green and Ella Scott Jeffress.

Census Pages
When looking at the census, experts suggest that researchers look on several pages before and after whatever family they are focusing on. Household #240 in Warren County begins on line 47 at the bottom of the page on the 1900 census starting with Andrew Bullock, Sr. on down through his son John. The remaining members of this household (James – Andrew, Jr.) are listed on the top of the next page on lines 1 to 6. These two pages were written with two different types of ink pens; one ballpoint and the other a finer or thinner tip. To me, the handwriting looks to be that of the same writer.

*Note: I found a 1910 land deed (cannot find my notes right now) in Vance County, NC where Andrew Bullock, Sr. purchased land. Maybe the Bullock family was in the process of moving during the time of the census which caused them to miss being listed on the 1910 census in either Warren or Vance counties.

1920 and 1930 Censuses
Furthermore, I have not been able to locate Uncle Andy B. on the 1920 and 1930 censuses. He was likely living in NY during these census years. I currently have three documents from the time period 1917-1936 which indicates Uncle Andy B’s residence as New York City.

These three documents and Uncle Andy B’s age conflicts will be discussed more in depth in future blog postings.

Posted by Professor Dru at 1:15 PM

Email ThisBlogThis!Share to TwitterShare to FacebookShare to Pinterest
Labels: Bullock, Census, Uncle Andrew Bullock, Who Do You Think You Are?

This continues to fascinate!
I'm staying tuned in!

Peace,
"Guide by the Ancestors"

Wow I love it! It's amazing what we can find when we put our minds to it!! This is awesome.