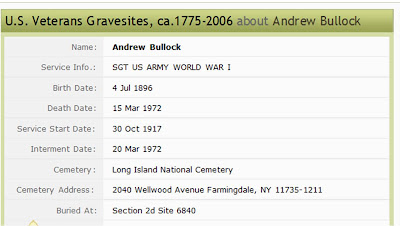 Thus far, I have two records which provide me with information on Uncle Andy B’s death in 1972. Both records were obtained from the Internet. The first is from the Social Security Death Index (SSDI) and the second is from the U. S. Veterans Gravesites database on www.ancestry.com.

I discovered Uncle Andy B’s social security death index record early on in my research along with SSDI records on four of his sisters, Bell (my great grandmother), Channie, Bessie, and Mima. Uncle Andy B’s SSDI record provided me with four pieces of information and one discrepancy.

The discrepancy on Uncle Andy B’s SSDI record is that his birthday is indicated as the 31st of July rather than the 4th which is the day listed on other records.

Later on in my research I discovered a cemetery record on Uncle Andy B. from the U.S. Veterans Gravesites database, 1775-2006m on www.ancestry.com. This provided me with five pieces of information and one discrepancy.

Other Death Records on Uncle Andy B.

Posted by Professor Dru at 5:33 PM

Email ThisBlogThis!Share to TwitterShare to FacebookShare to Pinterest
Labels: Bullock, Death Records, Uncle Andrew Bullock, Who Do You Think You Are?

Have you contacted the county courthouse in NY for Uncle Andy's military discharge papers? They should be on file there and the funeral home/cemetery might also have a copy in order to secure his Veteran's marker.

I had not thought to contact the NY courthouse for my uncle's discharge papers. Thanks for this tip.