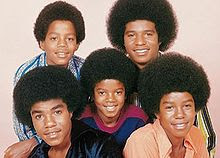 I grew up during the time of Soul and Rhythms and Blues music and popularity of the Motown sound. People like Diana Ross, The Temptations, and Smokey Robinson were the popular singers of my parent’s generation. These artists were young adults during my childhood and were still making hits which I enjoyed hearing. But the favorite artists of my generation were The Jackson Five. This group of five brothers from Gary, Indiana mesmerized black children of my generation as they sang and danced and wore fashionable bell bottom pants and huge afros. I could never afford to go to a Jackson Five concert, but I enjoyed watching them on television, hearing them on the radio, or drooling over photos of them in The Right On magazine. This magazine was a popular magazine about black singers like the Jackson Five and other celebrities such as actor Billy Dee Williams.

Today, thanks to Internet resources such as YouTube (video) or Playlist (music,) I can still enjoy the funky pop music sound from my youth.

Most African American girls had their favorite Jackson whom they admired and even dreamed about. My favorite was Jermaine, but I don’t remember why I liked him the best. Perhaps I developed a crush on him after he debuted his first single solo in 1972 called “Daddy’s Home.” I was nine years old in 1972.

Some of my favorite songs by the Jackson Five were ABC, I’ll Be There, I Want You Back, Rockin’ Robin, and Sugar Daddy.

I Want You Back

Posted by Professor Dru at 7:34 PM