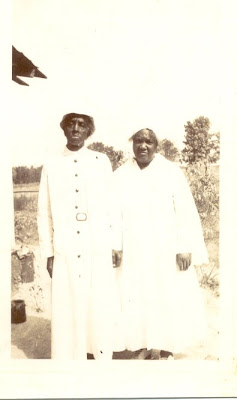 On Tuesday night, February 3rd, I received a phone call which gave me another "Happy Dance" moment. It was a call as a result of a letter I wrote to a pastor requesting information on former members of his church. In my blog posting on Finding Church Trustees Through Newspapers and Other Sources, posted on October 1, 2008, I wrote the following about my research of the Trustees of Veanus Chapel House of Prayer, which was a church organized by and named for my great-great grandmother Luvenia Jeffress Bullock (1864-1951.)

"I plan to write the church regarding my research and ask for information on their history. I hope to also find people in this church who are either descendants of the Bynum, Booth, and Suitt families, or who would remember any of these individuals. I also hope to visit this church before the end of the year."

On October 13, 2008, I wrote a long letter to the current pastor of the church (Friendship House of Prayer) where Trustees Bynum, Booth, and Suitt were once members. In the opening paragraph, I stated the reason for my letter.

"I am interested in learning about the history of your church. The reason for my interest is that I discovered that my great-great grandmother, Luvenia Jeffress Bullock (1864-1951) was associated with former members of your church (Estora Bynum, Sarah Booth, and Georgia Suitt). These three individuals were named on deeds related to Veanus Chapel House of Prayer, which was a church established by my great-great grandmother Luvenia around the early 1930s. I have traced the existence of this church through the 1960s and the three individuals named above were named as Trustees on several of the deeds for Veanus Chapel."

The letter also included a brief history of the three locations of Veanus Chapel Church. Attached to the letter were a variety of documents which further explained the information I had uncovered. The attachments were:

Another great bit of information learned from this phone conversation is the identification of the lady in the photo above standing to the right of Grandma Ven, who was identified as Georgia Suitt. Renee commented that Georgia Suitt was a pastor and minister of several churches. Some of my family members have said that Grandma Ven's church was pastored by a female minister. One cousin, who is now deceased, thought that the lady in the photo was Georgia Suitt, but she was not positive. Georgia Suitt's obituary is very short and does not mention that she was ever a pastor or minister.

Before ending the conversation, I got Renee's phone number and plan to call her later to ask more questions. Even though I had planned to visit the church last year, I did not make it there. I still plan to visit sometime this year. At least now, I know the name of at least one member. Although my specific questions were answered, there is still so much more to research about the Trustees of Veanus Chapel House of Prayer. I look forward to whatever new information I will uncover through my new contacts.

Posted by Professor Dru at 7:15 AM

that is absolutely wonderful that you found answers to some of your questions!

Don't you just love those new connections! A phone call answered! I would be doing the Happy Dance as well!!! I have awarded you the Kreativ Blogger Award...see http://christman26.blogspot.com/2009/02/kreativ-blogger-award.html
Enjoy!!!