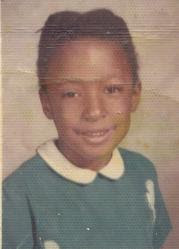 I was in first grade from 1969-1970 when this photo was taken. My family purchased my first grade photos, but all of them somehow ended up in a diaper hamper and were damaged. During my first grade year, my maternal grandmother was caring for five grandchildren, which included my three sisters and I, and our first cousin Jeff. He and my youngest sister Darlene were between one and two years old during my first grade school year, and both were still in diapers. During these days, babies wore cloth diapers, and not pampers like they do today. There was some type of diaper genie or hamper in the house for these two toddlers. I don’t know how it happened, but my first grade pictures ended up in that hamper. I cried when I found them there. Did one of those toddlers put it there, I wonder? Or maybe it was one of my other two sisters, who were ages 2 and 5 during that school year.

Nevertheless, the copy of my first grade class photo was not damaged. The class photo was a card about 5 x 7, with an individual picture of each student, the teacher, and school principal,. Another first grade photo was discovered many years later, sometime after the year 2000, when I discovered one in a photo album which belonged to my grandmother’s sister Mary.

The dress I am wearing in this photo was bought for me by my mother’s brother and sister, and it was one of my favorite childhood dresses. My aunt and uncle bought me several other new outfits to begin my first grade school year. This dress was passed down to each of my three younger sisters, who always inherited my old clothes. Guess that was a little advantage to being the oldest.
Posted by Professor Dru at 7:31 PM

You know, I can still remember several of my favorite dresses from 1st and 2nd grade, too. It's funny what things were so important to us at that age. It's a cute picture!

Great picture - what a sweet smile!! I, too, can remember various dresses from those first school years....always dresses because that's what we wore then!! My mom made my clothes and I LOVED going to the store with her to pick out material.