In early October 1972, my mother moved my three sisters and me from Virginia to New Jersey. We journeyed to New Jersey on the Greyhound bus. During our layover in Washington, DC, I purchased this postcard and mailed it to my grandfather Minor Elwood Thornton (1913-1979), some time after we arrived in New Jersey. I don’t remember if I bought other postcards during this layover. 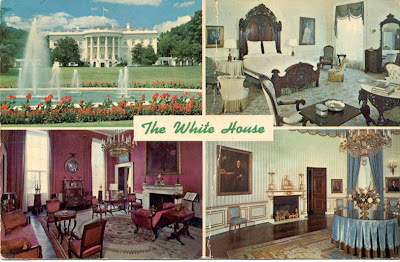 Finding Postcard Years Later
Several years ago, I went through the papers of my maternal grandparents and found this postcard which I had written a few weeks after my ninth birthday. I’m not sure why I didn’t address the card to both of my grandparents. Perhaps I sent Grandma a separate card, but if that actually occurred, she did not keep it. 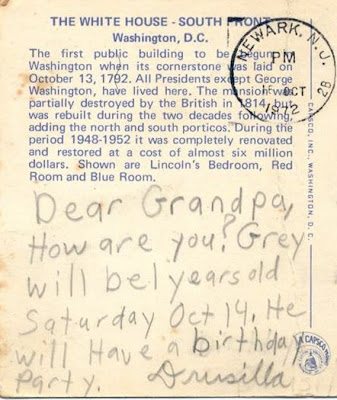 Observations About the Postcard
I had just begun fourth grade when this postcard was written. Three things come to mind as I look back at this.

First, I thought that I learned to write in cursive during my third grade year, but if this is my signature, and then we would have learned cursive writing in the second grade. This is evident with the way I wrote the majority of the postcard in print and my name is signed in cursive. Also behind the cursive print, I can see that I printed my first name, but then erased it. After carefully, looking at the signature, I began to suspect that my mother may have written my signature in cursive because I remember the shape of her “D’s” when she wrote her name “Dorothy.” I looked at her signature on my birth certificate, and the writing looks similar. Today, I was looking for other documents with her handwriting, but can’t find them right now.

The second observation about this postcard is that I’m amazed that this card, which I wrote in pencil, is still readable after 36-years.

My third observation is that I referred to my grandfather as “Grandpa” instead of “Granddaddy” like I always remember calling him. Did my nine-year-old mind think that Grandpa was the proper way to refer to him in writing? Or did I actually address him as Grandpa during this time in my life?

Cousin Greg’s First Birthday Party
My youngest cousin Greg, not “Grey” as I spelled on the postcard, turned one about a week after our arrival and a big birthday party was given to him by his parents to honor this occasion. The postmark on the card was October 16, 1972, which was a Monday. I remember that Greg’s party was on a Saturday afternoon so I must have written the postcard sometime prior to the event, and mailed it on Monday.

Back to VirginiaWe stayed in New Jersey for about eleven months, but did not return on the Greyhound bus. Instead, we traveled home by a car that was driven by my grandmother’s youngest brother.
Posted by Professor Dru at 7:17 PM

Dru - what a treasure to have this and know that he kept it tucked away. Great find!