Will of David Thweatt of Greensville County, VA

Slaves were often listed in wills and deeds of slave owners. In some cases, a slave owner freed his slaves through a will or deed. Such was the case with David Thweatt of Greensville County, VA. 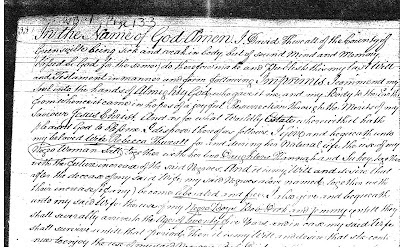 In his will, he freed his slaves under certain conditions and gave some indications of kinship.

“I give and bequeath to my beloved wife Rebecca Thweatt for and during her natural life the use of my negro woman SALL, together with her two daughters HANNA and SUKEY.” “After the decrease of my wife, my said negroes above named together with their increase if any, become liberated and free.”

I also give and bequeath unto my said wife the use of my negro boys, BOB, DICK and JIMMY until they shall severally arrive to the age of twenty five years in case my said wife shall survive until that period then it is my will and desire that she continue to enjoy the use of my said negroes BOB, DICK, and JIMMY during her natural life, and after her decrease in the latter case on their arrival to the ages of twenty five years in the former case.”
The will of David Thweatt was proved in the court on May 20, 1789. His wife, Rebecca, was qualified as Executrix at May Court 1790.