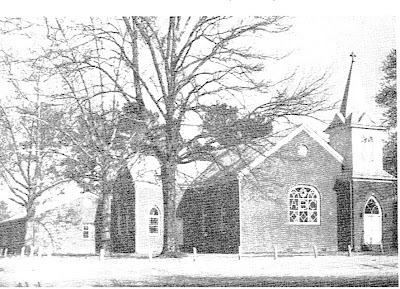 Antioch Baptist Church located in the Skippers area of Greensville County, VA is the church where my paternal grandmother Hattie Moore Pair (1902-1956) and her siblings grew up. This was the church were their mother and grandparents attended: Mary Eliza Robinson Moore (1880-1920) and her parents Joshua Robinson (1846-1935) and Ersie Jane Providence Moore (1850-after 1905.)

According to the church history of Antioch Baptist Church, the church began in a Bush Arbor near the Saw Pond on the land owned by Sandy Ferguson, and his wife, Susan, around 1870. It is believed that some type of frame structure was built on the site, but it was destroyed by fire. There was a lot on intermarrying between the Ferguson, Greenaway, and Robinson families. Both Sandy Ferguson and my great-great grandfather Joshua Robinson were descendants of free blacks in Greensville County: Sandy Ferguson was the son of Henry Ferguson who was the son of Betty Ferguson. My ancestor Joshua Robinson was the son of Maria Morgan Greenaway (1809-after 1900,) a free woman of color.

By 1896, Antioch Baptist had expanded the church property with the acquisition of one acre of land purchased from Mr. Lewis H. Foster, a large landowner. A deed for the land was drawn up on January 13, 1896 by the following trustees: John J. Smith, Jesse Avent, Thomas Wright, William Edward Watson, and William Wright. The deed was recorded on March 6, 1899.

Today, there are descendants of Joshua and Ersie Jane Robinson who are members of Antioch Baptist Church.
Posted by Professor Dru at 9:44 AM