Written for the Carnival of Genealogy, http://www.creativegene.blogspot.com/ 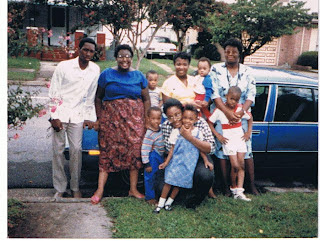 My First Car
My first major purchase was a car which I purchased on Valentine’s Day in the year 1987. I had been out of college for almost two years. At that time, I didn’t have an apartment, but lived with an older lady in a house near my former college. The car was brand new and was a 1986 blue Cavalier with less than ten miles on the odometer and no air conditioning. This was one of the leftovers of the previous year’s cars in which I was able to use a rebate as a down payment. The car lot was within walking distance from my house and I often stopped by to look at cars.


Photo above taken August 1987 of my three sisters and me, our cousin Greg, and my nieces and nephews standing in front of my first car.


Transportation During Childhood
During my childhood, transportation was an issue for our family. My three sisters and I spent most of our lives living with our maternal grandparents and they never owned a car. According to our grandmother, Granddaddy used to drive

when he lived in a rural area of North Carolina, but never got his license or a car when he moved to the city in the early 1940’s. Our father had a car during most of our childhood, but since our parents were separated much of the time, we didn’t see him much. As a result, we used public transportation such as a bus or taxicab or just walked. In fact, the city bus passed our house and stopped at a corner just a short walk away. Before our church purchased a van, we would ride a taxicab to church with our grandparents. Afterwards the van became my family’s mode of transportation to church.

Getting Driver’s License
Despite the fact that my family didn’t have a car, I still enrolled in Driver’s Ed during 10th grade. Passing the theory test was not a problem, but the actual driving was a challenge for me. When I sat behind the wheel for the first time, I turned the ignition and shifted the gear into drive without putting my foot on the brake. This was the beginning of a long journey to learning how to drive. I was scared to death of driving, but despite my fears and slow progress in learning to operate a car, I persevered. There was no one in my family to help me practice. However, my grandmother got a friend of my uncles to help me practice driving. He was very patient with me and also took me to get my license. I did not get my license on the first try, but kept practicing and finally got it.

My Car Ownership HistoryA few years before I could afford to purchase car, I rented cars occasionally. This provided great driving practice as well as helped me determine the type of car I wanted to purchase. My first 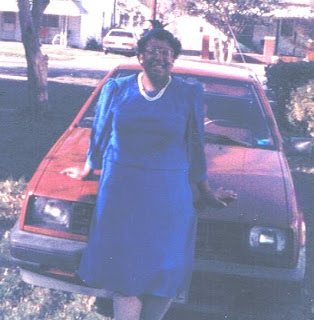 car, a blue 1986 Chevrolet Cavalier, was not air conditioned and I roasted for many summers until I purchased a red Dodge Neon in 1995. Air conditioning, of course, was the number one priority with my second car. The second priority was cruise control because I loved to travel and liked to give my foot a rest when on the highway. I choose the Neon because I saw a lot of them on the road at the time and thought that they looked sporty. During the time that I owned the Neon, my job as a Computer Trainer was 30 minutes away from my house. I also trained in various locations, thereby putting lots of miles on this car. During the Thanksgiving weekend of 1999, my red Neon was stolen from in front of my house. It was then, that I learned that Neons were one of the top cars to be stolen because the door could easily be opened using a wire clothes hanger. The car was found a few week later and the damages were repaired. I drove the car about another year, but then began having transmission problems. I decided to get a new car and choose another car in 2001 and went back to a Chevrolet Cavalier. This one is a dark green.

My Family Car History
My father had cars when I was a child, but I don’t remember what type they were. I do remember playing in one of the cars when I was about 3 or 4. I must have put the car in neutral or something. Afterwards the car started moving and my father and some other men came running towards the car where I was sitting alone. I do not remember what happened after that.
Neither set of my grandparents owned cars. My great grandfather Minor Thornton (1893-1966) may have possibly owned a car. Below are photos of one of his daughters, Dorothy Bell Andrews (1921-1982) standing in front of a car in the family’s front yard. In the first photo, she looks to be in her preteens and in the second photo, she is a young woman possibly in her 20s. Aunt Dorothy never had children so I don’t know the identity of the baby she is holding. 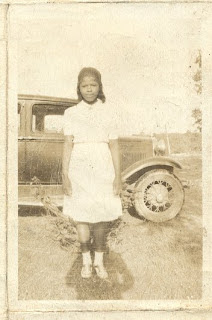 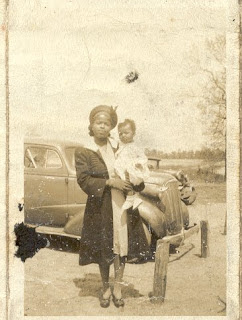 Car Purchased by Great-Great-Mother
According to oral history, my great-great Grandmother Luvenia Jeffress Bullock (1864-1951) purchased a car for her youngest son, Joseph, to drive her to church. Like young men and even young women too, who take advantage of car privileges, Joseph, reportedly didn’t always show up to take his mother to church where she wanted to go. No doubt, this created much friction in the Bullock household. Grandma Ven would have purchased this car sometimes before October 11, 1932, before her son Joseph Bullock died at the age of 27 from “pulmonary tuberculosis” in the Jubilee Hospital in Henderson, NC. My grandmother Emma and her younger siblings were living with Grandma Ven during the time of Joe’s death, but my grandmother does not recall his death. She does however recall getting rides in this car with her Uncle Joe.
Posted by Professor Dru at 6:49 PM

Dru, Welcome to the COG! What an interesting article and pictures about your car experiences. Thanks for joining us at Jasia's COG --- hope you will return again and again.

Now I have to ask: Where was your relative MINOR THORNTON located?

Another Chevy fan- yea!! I enjoyed your article and all the wonderful photos. I hope we'll be hearing more of your stories in future COGs.

Hello Professor Dru and welcome to COG! A great post on cars and I loved the old photos!

You won me over with your other blog on PowerPoint - isn't it amazing that program has been around for so long? And I bet we've both seen the best presentations and some that were just plain ugly!

Welcome to the Carnival, Dru, and thanks for participating. I enjoyed this post and your others as well.

I'm a little late in welcoming you to the COG, but...Welcome!