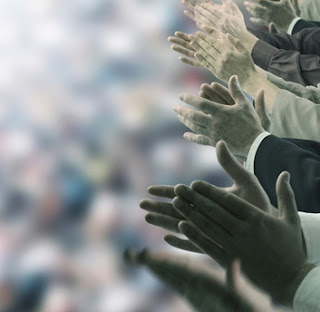 Handclapping (and even foot tapping) can provide natural instrumental music to a song.

Note: Both performances of this song were videotaped. However since I have not yet obtained parental consent from the parents of these young people to share photos or video with the public, I will not post these videos online. The videos were viewed in class as part of the lesson.
===================================
Musical Section #2 - Finding the Right Song
(For Part 1 of this story, click here)

During the third week of the program as I prepared my lesson, I was looking for an older song like “Precious Lord” on the MP3 downloads of http://www.amazon.com/. I went back and forth between renditions of this song by Mahalia Jackson and Aretha Franklin. Then I decided to listen to other songs on an album by Aretha Franklin which included “Precious Lord.” I heard a variety of songs including the voice of her father, Rev. C. L. Franklin , who was a popular minister and gospel singer during my childhood. The version of “ This Little Light of Mine ” caught my attention because this tune was sung in a style without instrumental music, but only with handclapping and foot tapping. This would be a perfect song to talk to the youth about the period when many churches sung without instrumental music, I thought.

Performance #1
I decided to use this song as an ice breaker at the beginning of the lesson and to line up chairs in two rows where the youth and their mentors would sit like a congregation. Prior to playing the song, I gave the young people a brief lecture and demo of this hand clapping/foot stomping style of music. Then I played the song and asked them to sing along.

The song was slower than we normally sing it today and it took a little getting used to it. As the group sang, I encouraged them to get into character like the old people they heard singing from the recording. I could tell that three young men (ages 13 and 14) were into it the character of the music because they made faces, sounds, and gestures like old people as they sang.

Performance #2
At the end of the session, I decided to have the youth sing the song again for the benefit of one of the group members who came in late. During this singing session, the group had trouble keeping with the pace of the song and on several occasions began singing at a faster pace than the recording. The old people singing in this recording took their time singing this tune which is typically sung at a much faster rate today. Nevertheless, we got though this second performance of the song.

Spontaneity in the Room
But what happened next blew my mind and I knew at that moment that incorporating his song into the lesson was phenomenal. Immediately after we finished singing “This Little Light of Mine” with the recording, one of the young men spontaneously belted out singing “I Don’t Know What You Came to Do.”

The group, without prompting, responded singing, “I Don’t Know What You Came to Do.”

“I Don’t Know What You Came to Do,” sang the young man as he and the group clapped and stomped to the beat of the fast paced song.

The song leader repeated the line followed by the group repeating the same line.

“I Came to Clap My Hands,” the young song leader sang. Rather than responding in song this time, the group clapped twice at the end of this line.

“I Came to Stomp My Feet,” he sang and the group answered back with two stomps.

“I Came to Praise the Lord,” the young man sang. By now he had fully embraced his role as song leader and he even raised his hand in praise to God at the end of this line.

I’m not sure why the song ended abruptly, but it appears that one of the young people sung something offbeat from the way the song was supposed to go. Whatever it was, it got the attention of his mother who was one of the mentors sitting on the back row and she stood up laughing and hit her son lightly on the back in a playful manner. The group all responded with laughter.

We were way past the end of class by this time, so it was good that they did stop the song.

The atmosphere in the room was electrical as we packed up to leave and by this time everyone was hyped up. One of the young ladies began chanting or cheering C-H-R-I-S-T or something like that. The youth from her church responded with the spelling of other religious words and I assume that this is something that the youth in their church do. I was busy packing so I didn’t ask them about it.

The Benediction
As the youth who remained in the room proceeded to leave, the same young lady who had previously started the chant/cheer stopped and raised her right hand, bowed her head, and said as if she were conducting the closing of a church service, “May the Lord watch between me and thee.” We all knew the directio she was going with this statement and I joined in with her and the others.

“While we’re absent, one from another, Amen!” we all recited in unison in this familiar benediction. This act was like icing on the cake.

The kids exited the room and I followed shortly thereafter with a huge smile on my face and overflowing joy in my heart at a lesson well done.
Posted by Professor Dru at 11:57 PM

I wish I could have been there. This sounds wonderful!

You are breaking new ground, Professor Dru, by incorporating things familiar to the young people while stimulating their interest in history.

Your students will have memories that will last a lifetime. I remember the songs and benediction well. Oh, what sweet memories.

You made my day ProfessorDru!