Memory Monday - My Blog Gets Acknowledgement at Church Service 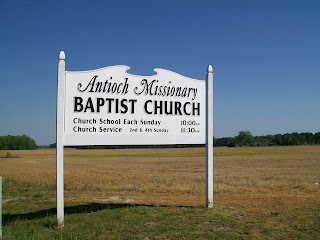 On the fourth Sunday in April 2009, I attended church services at Antioch Missionary Baptist Church in the Skippers area of Greensville County, VA which is about an hour and a half away from my home. When I arrived at the church, I sat in a certain section by myself. A minute later a cousin who had invited me to the service came over to tell me that she and other members of our family were sitting on the other side of the church. I moved to where they were and sat beside one of my aunts whose wheelchair was adjacent to a front pew.

The service was spiritually uplifting and there were many visitors there, including myself, who came to honor a former pastor of the church.

Since 1987, I have visited this church on several occasions for homecoming services and funerals of relatives in my father’s family. A few minutes before the benediction of the first service, the church pastor gave remarks. He was a new pastor of this church and not the same one whom I had met on previous visits.

I don’t remember the pastor’s exact words, but below is the gist of what I recall him saying and my reactions to his words.

Me: I’m a visitor, I thought, but it’s probably not me—there’re a lot of visitors here today for this special service---I don’t think my cousin told him that I was coming.

Pastor: “And she has a website called “Find Your Folks.”

Me: Oh my God, Oh my God, I repeated in my mind. That’s me. I’m sure I was smiling from ear to ear by this time as my heart raced.

Pastor: She wrote on her site that she would be visiting here today and she is a member of the Robinson family. He was referring to the Church Homecoming article written on April 19, 2009. “And she goes by the name ‘Professor Dru’ on the Internet, the pastor announced.”

Me: I was still in shocked to learn that the new pastor of my family church was also one of my blog readers. Despite my feelings of shock and elation, I graciously stood up after Pastor Tatum revealed my Internet name, turned toward the congregation, and waved. I felt like a celebrity for the day.

After the service ended, two ladies, who were sitting to my left on the front pew, introduced themselves and revealed that they part of the Robinson family. They said that they were descendants of Margaret. I knew from my research that their ancestor was a daughter of my great-great grandparents Joshua and Ersie Jane Providence Robinson.

Another lady sitting behind me asked which set of Robinsons I was from. I didn’t recognize the name of her father who was a Robinson. Finally, I pointed to my aunt who was sitting beside me, and asked the lady if she was kin to her. “Yes,” she replied. “So, I guess that makes us kin too,” I told her.

I was anxious to talk to the pastor after his grand announcement during his remarks. After meeting my three new cousins, I walked towards the pulpit which was just a few steps away. 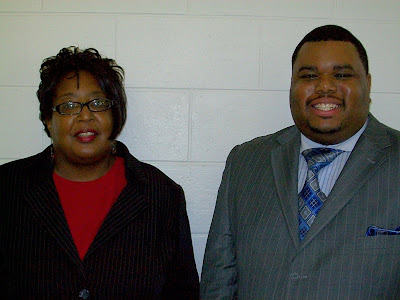 “How, did you find my blog?" I asked Pastor Tatum as I stood below the pulpit.

“When did you become pastor?” I asked. (The genealogist in me had to have a date or time frame.)

Pastor Tatum also mentioned several other postings on my blog such as a photo taken in the cemetery of the church during the 1950s. I did not remember this photo at first, but eventually recalled the photo of my grandmother Hattie Moore Pair at the graveside of her father Robert Moore. Read here-Robinson Family Cemetery

“You made my Day,” I told Pastor Tatum at the end of this conversation.

When I returned home later that evening, I searched my blog for the article mentioned by Pastor Tatum that included church history of Antioch Missionary Baptist Church. I found that it was posted on Sunday, April 28, 2008, which was the month after he became pastor of this church. Read here-Sacred Sunday I had obtained a written copy of the history of the church after I wrote a letter to the previous pastor sometime in the late 1990s.

It has been over two weeks since I visited Antioch Missionary Baptist Church and I am still SMILING every time I think about the events of that WONDERFUL Sunday.
Posted by Professor Dru at 8:32 PM

Wow Dru! I don't know that you could have packed more into a single day - receiving public recognition of your work, confirming that others find your blog interesting and valuable, and discovering new cousins! Congratulations!

What a FANTASTIC story! It got those good goosebumps reading it.

It doesn't get any better than that anywheres in genealogy.

What a wonderful surprise! I thought you were going to say that one of your relatives had him mention you. I bet you will be grinning ear to ear for a long time, deservedly so! Thanks for sharing such a wonderful story!

Dru that is awesome! So glad that your work was recognized in your local community by the church! That is absolutely wonderful!

Dru - What a wonderful story! Knowing that he was reading and truly interested in the information from your blog is fantastic. Those are the best followers to have! I'm sure you'll have many readers after his little "announcement" what a great acknowledgement of your work! Congrats!

Now that's what I would call an "ideal genealogy day." Fantastic!

Like George, I too got goosebumps reading your story. What a very special day....I know your ancestors were looking down and very proud of you!

Dru - great story! I'm sure it was a very exciting experience all around.

Good luck finding more information on the church, as we discussed on the AfriGeneas chat a few weeks ago!