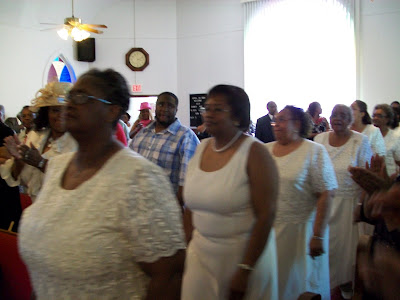 During my youth and young adult years (1970s and 1980s), I was a church choir member. During this time, the tradition of my church was for the choir to march into the church down the aisle, and into the choir stand. As the choir marched in singing, while rocking or swaying from side-to-side, the congregation would stand up and look towards the back of the church to watch the choir processional.

When the senior choir in my childhood church sang and marched down the aisle, I would always look at their shoes and would pass judgment in my mind as to if the shoes were pretty or ugly. I think that most of the children in my church did the same thing. I did not realize how much I missed and valued the choir march tradition until last month when I visited a family church.

Last month, when I visited my father’s family church, Antioch Missionary Baptist Church in the Skippers area of Greensville County, VA, I realized how much I missed the choir march tradition. On that 4th Sunday in April, the youth choir marched into the church. As they marched in, a thought hit me as I watched and recalled that some churches, which formerly practiced the choir march tradition, no longer did this. I got excited as I watched these young people march and sing. For more on my 4th Sunday in April visit, click here.

In the second service that afternoon, the mass choir marched into the church. I was thrilled and excited by the upbeat music and their marching! I took several pictures instead of video, but later I wished that I had thought about my digital camera video instead. I promised myself that I would remember to videoe the next time I visited Antioch.

Yesterday, I visited Antioch again and the service was spiritually uplifting. This time I made sure to videotape the choir march. Some choirs sing as they march in; but the choir at Antioch marched in as the musicians played. They began singing when all the choir members got into the choir stand. Like some marching choirs, the Antioch choir was escorted in by an usher. (See portion of video below)

I do not know when or where the church march tradition began in churches, but I love it, not only because it is a reminder of the church traditions of my youth, but also because I believe that it sets the tone of worship as the choir enters the church singing praises to God.

Posted by Professor Dru at 6:11 PM

Great post, Professor Dru! Now the kids do a grand march and dance. Brings back the memories of when I was growing up in the church and sang in the youth choir. We used to bring the house down! :)

That is an awesome clip - thank you for sharing this one! (My toes are still tapping.)

I just had to google "why do choirs march" and this post came up. I witnessed a choir march today for the first time in my life and wanted to find out the traditions and reasons behind it. It was fun to watch but I'm still unclear as to why its done.

Deacon Reynolds not that kind of church lol