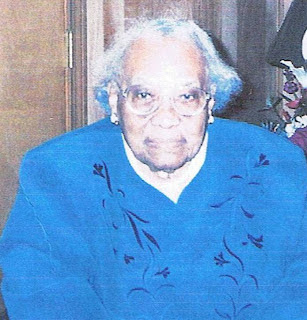 By the time I met my Aunt Della around 1996, I was in my early 30s, and had been researching my family history for about two years. Aunt Della is the youngest sister of my paternal grandmother, Hattie and she is now the last living of my grandmother’s siblings. Three of her brothers were alive when I began my family history research. Though various conversations with Aunt Della, I have learned about my father’s family. She used 1910 as her birth year, but often said that she didn’t think that was correct. The births of Aunt Della and her siblings had been recorded in the family Bible by her mother, Mary Eliza Robinson Moore (1880-1920,) however this Bible was destroyed in a house fire. By the time she applied for a social security card in the 1960s, she had been using the birth year of 1910.

Early on in my research, I had located Aunt Della’s family on all the censuses available, including her name listed on the 1910, 1920, and 1930 censuses. But it would not be until about two years ago, that I would revisit the census records and reevaluate all the information given on this family. At this time, I looked at the date the census was recorded (May 9, 1910) and noticed that the age of Aunt Della was listed at ‘5-months.’ She had to have been born in 1909 I concluded. (See 1910 Census – Moore Family)

After this discovery, I had several phone conversations with Aunt Della, but I did not want to share this new finding over the phone. In 2007, our family had a reunion and I spoke about our family history, but did not mention this new finding because I felt it was better to talk to her in private first. I did, however, mention this discovery to Aunt Della's youngest daughter, Marva Jo. She told me that she also had discovered this age discrepancy through the census and told her mother about it. However, for whatever reason her mother did not react to this news. The family also continued using Aunt Della's age based on a 1910 birth year.

During the past year, I had several phone conversations with her and intended to visit, but somehow never got around to it. Another family reunion arrived this past 4th of July weekend, and I again spoke at our family banquet about our history and DNA, but did not mention this age discovery. I had prepared poster boards displaying copies of family documents. After showing them to Aunt Della at the reunion, she asked for copies. On the next day, before leaving town, I visited her with copies of documents including the 1910 census.

Aunt Della was not surprised by this new birth year discovery which would make her 98 years old instead of 97. “Come back to see me real soon,” she said as I was about to leave her house. “You know I’m not far from 100,” she said with laughter in her voice. If she lives another year and a half, she will turn the big 100.
Posted by Professor Dru at 11:03 PM

Nice article Dru! Enjoyed seeing a picture of Aunt Della! I hope you are making progress on getting her birth year corrected, will be waiting to hear ~ Cheryl

Dru - I enjoyed seeing a picture of the venerable Aunt Della and hope that she will have a great 100th birthday because of your efforts. Dianne

Isn't it amazing that even today we have people alive in America who do not know their birthdates? A sober reminder to keep our documents safe.