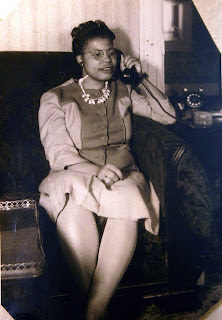 This is my Cousin Isabell Russell, who was a niece of my great great Grandfather Andrew Bullock (1862-1915). Cousin Isabell was a daughter of his sister Lucy Bullock Russell (1882-1967). Cousin Isabell was born in Norfolk, VA in 1916. Her parents were from Warren County, VA and moved to Norfolk for a few years before 1916. They returned to North Carolina after WWI and lived there the remainder of their lives. Cousin Isabell, however, moved to Connecticut during her adult years. This photo was probably taken in Connecticut.
Posted by Professor Dru at 5:28 AM

If you don't mind, i added you to my blogroll. I like to read about others who are also researching their roots.