I've been busy during the past two weeks going though North Carolina Death Certificates recently posted on Ancestry.com. I already had death certificates on my most of my direct ancestors who died since 1913 and a few collateral family members. However, the convenience of having these certificates on the web is enabling me to explore many other family lines. I have also been posting some of these certificates for my Thornton and Bullock families on our MyFamily websites.

I also found a death certificate for my great great grandmother Matilda Bailey Thornton who died in 1916. When I wrote to the county a few years ago for her Death Certificate, they claimed to not have one for her. I had received information from a Thornton cousin that Grandma Matilda had died in 1916. I found her in Ancestry by using her maiden name. In ancestry, her married surname was spelled "THOMTON" instead of "THORNTON." It my have been spelled like that in the county death index which would explain why the Halifax County Register of Deeds office claimed not to have a death certificate for her. 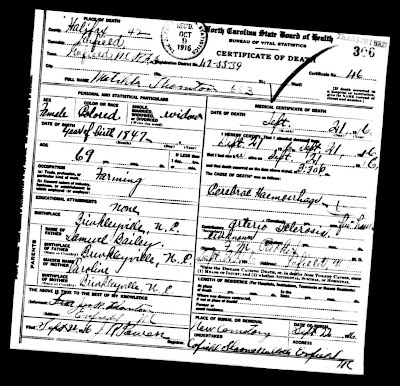 This information on this death certificate takes me back another generation by giving me the names of Grandma Matilda’s parents as Samuel and Caroline Bailey. I found her mother on the 1870 and 1880 censuses, but Grandma Matilda was not living with her mother.

I had a similar issue with another North Carolina county when I requested the Death Certificate for my great grandfather George Johnson. In my letter to the county, I stated that George was married and gave the name of his wife as well as his estimated age and his death year-1932. The county sent me a DC of a 5 month old baby. I sent it back and they returned the certificate with a note stating that this was the only GEORGE JOHNSON they found who died in 1932. I visited the county some time later and searched the index myself. Listed a few lines below Baby George Johnson in the index was my great grandfather. His name was listed as GEORGE JOHNSTON. 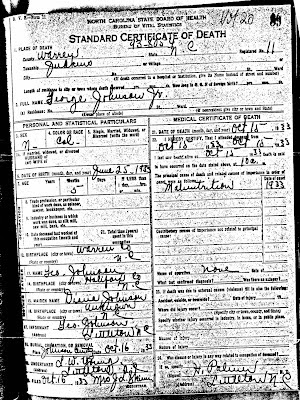 Sounds like you're having some great discoveries! I too have just loved that this database was made available and have had several discoveries of my own. Have fun in your continued searching!

Congratulations on your discoveries Dru! I need to start searching the North Carolina Death Certificates, myself!