Looking at the 1870 census of the household of Charles Lundy, I find two children listed—all of the first names of the two children in the household match the names told to me by Aunt Della. “My Grandma Ellen had children named David, Mary, and Pleasant,” she has said on numerous occasions. “They were not Washington Moore’s children,” she recalled.

The 1870 and 1880 censuses are the only documents I have found on Pleasant Lundy so far and the 1870 census is the only one found for David Lundy. However, further search of Mary Lundy, the daughter of Charles Lundy led to various revelations.

The marriage occurred on December 30, 1884 in Chesterfield County, VA. By 1900 William and Mary Lundy Spratley were living in the city of Petersburg, VA. 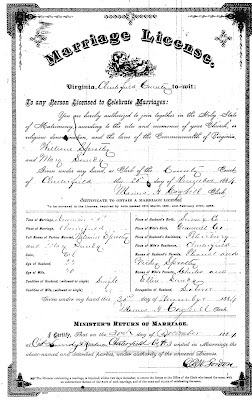 View of section of marriage license with name of parents of bride and groom.

Posted by Professor Dru at 4:37 AM