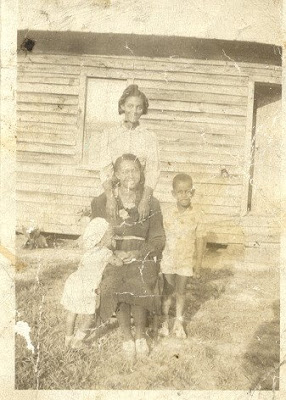 Who are these people? I really want to know!


This picture has been in the photo album of my maternal grandparents every since I can remember. My grandmother Emma says that these are some of my granddaddy's kinfolks, but she doesn't remember who they were. My maternal Granddaddy was Minor Elwood Thornton (1913-1979), and he lived in the Enfield area of Halifax County, NC until around 1940. From there he moved to Newport News, VA, where he remained the remainder of his life. I believe that this photo was taken somewhere in North Carolina and that these individuals were likely family or friends.

One of Granddaddy’s cousins, who is in her mid 80s, has looked at the photo, but she does not know the names of the people in it. Hopefully I can find some other older family members who may be able to identify the individuals in this photo.
Posted by Professor Dru at 6:00 AM

Email ThisBlogThis!Share to TwitterShare to FacebookShare to Pinterest
Labels: Granddaddy, Smile for the Camera, Thornton

You have a mystery on your hands.

I love the little hat on the child's head. I hope you are successful in identifying them.

Have you dated the clothing to narrow down a time frame? Great picture - I hope you have luck in discovering their identities!