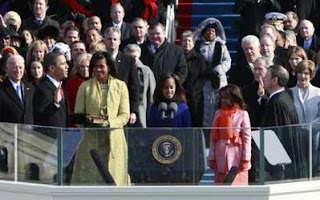 U.S. President Barack Obama is sworn in as the 44th President of the United States during the inauguration ceremony in Washington, January 20, 2009. The Bible Michelle Obama (2nd L) was holding is the same one that President Abraham Lincoln used at his inauguration in 1861. Daughters Malia and Sasha (R) watch the swearing in of their father.

There are some days that you will forever remember where you were and what you were doing. Tuesday, January 20, 2009 is one of those days.

Even though I only live a little less than four hours from our nation's capitol, I was not about to go there on Inauguration Day and deal with the large crowds and the cold weather. On a normal day with tourism and all, Washington, D.C. is crowded and congested. I even have relatives and friends who live in the Washington, D.C. area, but that still didn't convince me to try to make the trip.
I was satisfied with watching the inauguration of our 44th president on television and online. My 86-year-old maternal grandmother Emma and I were glued to the television all day. Neither of us had ever watched an inauguration, but this one was quite special because of Barack Obama, the first African American President. Both of us were very excited and amazed at all the ceremony and pageantry of the festivities. 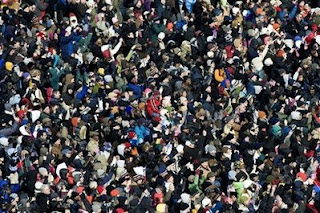 When I saw the crowd cheering and waving flags, I felt like I needed to wave something. I didn't buy an American flag as I had planned, but I waved a small towel to show my excitement for this inauguration. 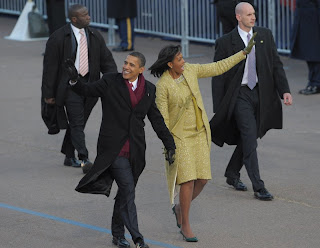 How thrilling it was to watch as our new American President and First Lady walked down the street. Even though Michelle's dress was lined and padded, she still had to be cold. I thought about her later in the week when I wore a dress to work. As I got into the car to warm it up, I thought about my freezing legs and Michelle's freezing legs. Pantyhose and the cold weather just don't mix. 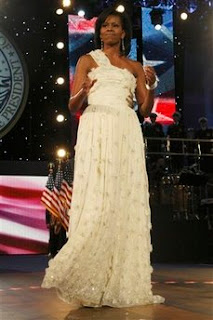 I stayed up a little past 8 p.m. to see Michelle Obama's dress. Didn't she look lovely in this ivory gown?

Posted by Professor Dru at 5:36 AM