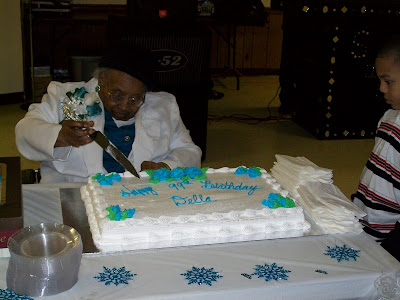 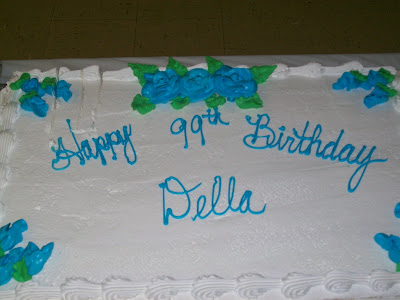 On December 26, 2007, our family celebrated Aunt Della’s 97th birthday. The next year we celebrated her 99th birthday. Why the two-year jump in a year?


Aunt Della’s youngest daughter and I found evidence through the 1910 census that she was born in 1909 instead of 1910 as she originally thought. I presented the evidence to Aunt Della in July 2008. (Read more)


Birthday Party Invitation
I received a birthday invitation from Aunt Della’s daughters and was thrilled to see an acknowledgement of her correct age. I’m sure that family members were puzzled as to why the invitation said 98th/99th birthday.

Birthday Party Program
Aunt Della’s daughters included a statement on the back of the party program explaining the age discrepancy at her birthday party held on December 26, 2008. I was very pleased to see this acknowledgment.

Vital Statistics Office
At the birthday party, Aunt Della’s oldest daughter informed me that she had taken her mother to the Vital Statistics office in our state capitol and showed them the copies of the 1910 and 1920 censuses that I gave her mother. My cousin was given an official document validating Aunt Della’s birth date as December 26, 1909 instead of December 26, 1910. My cousin did not remember what type of document she received, but she was told that it could be used to provide proof of her mother’s date of birth. She plans to send me a copy of the document.

Lord, I want to Make one hundred, ninety-nine and a half won’t do
By the time of the Aund Della’s party, the decorations, program, and cake all contained 99th birthday instead of 98th. When Aunt Della was asked to have words, she sang the following words to the tune of an old song entitled “Lord, I’m striving to make 100. 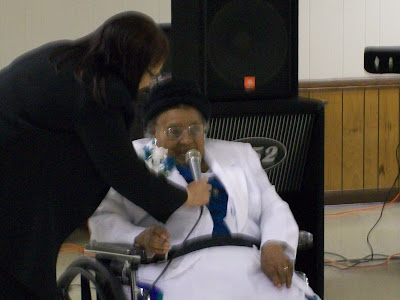 The old song, “Lord, I’m Striving to make 100,” is not about striving to turn 100 years old, but rather striving to live a perfect and pleasing life unto God. Nevertheless, Aunt Della changed the words to this familiar song and her party guest joined her in singing.

Birthday Tributes
Aunt Della was presented with tributes by her three daughters, grandchildren, great-grands, other family members, and friends. Her great-grands presented her with a large picture of President-Elect Barack Obama.

Save the Date - 100th Birthday Party
Aunt Della’s youngest daughter asked everyone who attended the party to SAVE THE DATE December 26, 2009 to celebrate her mother’s 100th birthday party. 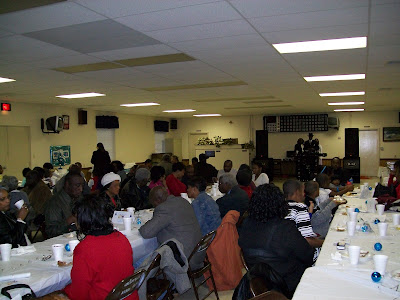 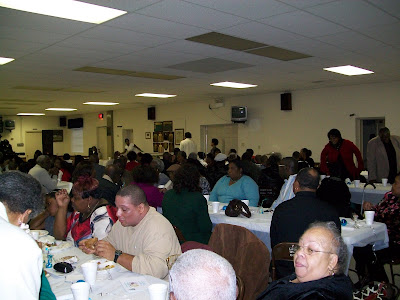 Posted by Professor Dru at 6:33 PM

Dru - What a wonderful time you all most have had, and what a great story! Just imagining the history she's actually lived to see in her lifetime is incredible! Many congrats and well wishes to her! Great celebration, I'm sure she enjoyed herself. Thanks for sharing!

Oh Dru, what a wonderful post! Emotional. Della looks great and has a personality too! ;-) Looks like she had a wonderful 99th birthday! I can't wait to hear about the 100th! Great post!

Hi Dru,
What a nice tribute. Loved your pictures and seeing the huge group of invited guests. Can't wait to hear about her 100th...bet you are working on that as we speak.

Bless her! What a wonderful lady! Looks like everyone attending had a fantastic time.

As we say, "Many happy years (Mnohaja blahaja lita)!" It's such a blessing to know a person who has seen so much of life.

That's the funny thing about censuses; they're usually one of the least reliable sources for age, but this is one of those cases where the census trumps the other information - I had a relative for whom all the other records said he was born in 1900, but the 1900 census said he was born in 1899 - and he had to have been, otherwise he wouldn't have shown up on the census in 1900!

Dru -- a great post, and, a how neat to see the benefits of genealogy research for someone in their lifetime!
On to the 100th!
Dianne

What an amazing story! I think it's so wonderful what your aunt and the rest of your family have accomplished!