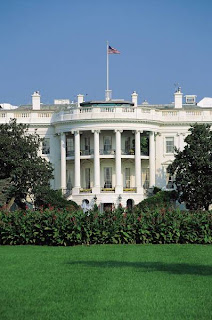 On Saturday night, I began an Internet search on 'White House birthday greetings for Centenarians' because my Aunt Della will be turning 100 next year. Aunt Della is the youngest sister of my paternal grandmother Hattie. Even though Aunt Della won't turn 100 until December 26, 2009, I wanted to look into this matter early so that my family would know what to anticipate. I wasn't sure if a birthday greeting from the President of the United States was automatically sent, or if someone needed to submit a request. From my Internet search, I learned that a request has to be submitted at least six weeks in advance and that the honoree has to be a U.S. Citizen.
I was extremely surprised to learn that individuals as young as 80 can receive a birthday greeting from the President of the United States. Wow, I thought after reading this, Aunt Della, and my other elderly relatives, such as my 86-year-old maternal grandmother, could have already received a birthday greeting form the President of the United States if I had known about this age criteria.
I also learned that official greetings from the White House are not only sent for birthdays, but also for other special events such as a 50th anniversaries, Weddings, a Baby's Birth, Eagle Scout Award, Girl Scout Gold Award Bar, and Bat Mitzvah's or other equivalent events.
I'm looking forward to utilizing the White House Greeting card to honor my Aunt Della and other elderly family members, as well as to welome the births of two new additions to my family (a great niece and a great nephew whose arrivals are expected in February and March of 2009.) The White House Greeting Cards will be even more special for my family since they will be signed by the first African American President of the United States of America, Barack Obama.
For more information on Greetings from the White House, visit the websites below.
Posted by Professor Dru at 6:16 AM

Here in the UK Centenarians get a birthday greeting from the Queen. We've got a neighbour who's now 101 (and going on a weekend coach trip organised by my Dad!).

Thanks for the info, Dru! I just sent a request for a birthday greeting for my father!

Dru, I think the 100 yr. old age limit might be for The Today Show. Please let the FTM group know when her birthday is, I would like to send a personal card for her 100th.

Hopefully you will be able to get a birthday greeting for your grandmother in 2009.

Hopefully you will be able to get a birthday greeting for your grandmother in 2009.

Wow! Thanks for sharing this information, I surely can use it in the future. Good Job!

Thanks for sharing this amazing information. I will definitely put it to use and share it with others!

Thanks for sharing this information, i will definitely put it to use and share this with others!