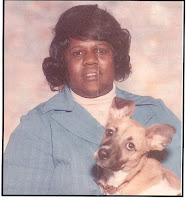 I love this photo from the funeral program of Cousin Martha Johnson Eaddy (1928-2003). She was obviously a dog lover. Cousin Martha was a double cousin of my maternal grandmother Emma.

You have been tagged at http://heritagehappens.blogspot.com/2008/11/tagged-again.html

Have a great day Dru!