I am pleased to report of my great success in “finding my folks” through numerous newly added Virginia databases on Ancestry.com such as the Virginia Death Certificates (1912-2014).  Search of this database has allowed me to make numerous family connections. However, on Wednesday evening (October 21, 2015), I stumbled upon two death certificates which provided an ancestor's maiden name and also information that took me back another generation on my James Family of Greensville County, Virginia.
County, Virginia.  The James family is the birth family of my great grandmother, Mary Lula James Pair (1880-1944).  I traced my great grandmother through her death in 1944, however, I was only able to locate her parents and siblings up through the 1900 census.  I searched later censuses for her parents and siblings, but did not find anyone in this family living in Greensville County, Virginia.
My gold mine finding on Wednesday, October 21st resulted in discovering the following two death certificates.  This finding gave me great genealogy joy! 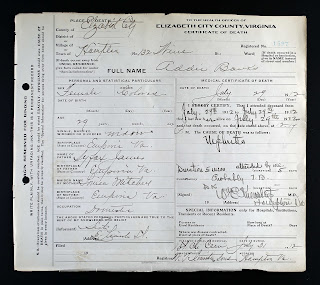 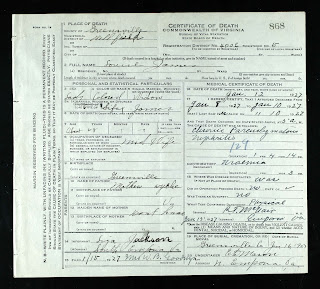 Next, I did a surname search for "Wyche" because I recalled seeing persons with this surname living with my 2x grandparents “Cyfax and Louisa James” on the 1870 and 1880 censuses. My search resulted in finding the death certificate of my 2X great-grandmother Louise (Louisa) James.  This finding added the following new information to my genealogy collection.


Locating these two new death certificates has changed the course of my genealogy research of my James family.  This weekend, I found additional documents through Ancestry.com on this family and these findings make this quest even more interesting.

Posted by Professor Dru at 6:50 PM

Great post! I remember you sharing the Wine St. discovery with me. Did you ever go by the property?

Keep up the good work!

Happy Blogiversary! I'm going to start posting to my new blog on a regular basis April 1, 2016 (no foolin')
I'm at
thehoneymoontrail.blogspot.com