Once in a while, I search online genealogy sites such as www.ancestry.com to see if there are any new records available.  One way I do this is by clicking on the little leaf next to individual names in my Family Tree Maker genealogy file.  When I clicked on the leaf next to the name of my Great Grand Uncle Andrew Bullock, I discovered that new military records about him were available online.

Blog Series About Uncle Andy B.

Perhaps, some of you may recall in 2010, the 12-part series I wrote on Uncle Andrew Bullock whom I affectionately call “Uncle Andy B.”  For those of you who either missed it or don’t remember, Uncle Andy B. was a brother of my great-grandmother Bell Bullock Johnson (1890-1982).  He left Vance County, North Carolina possibly in his teens (prior to 1917) and moved to New York and remained in that state until he died in 1972.  During interviews with family members and friends of the family, no one seemed to remember much about Uncle Andy B. since he left North Carolina at an early age.  In an attempt to learn more about this brother of my great-grandmother, I decided to analyze and write about the few documents I had collected on him. (click here.) 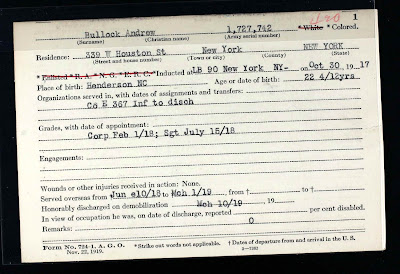 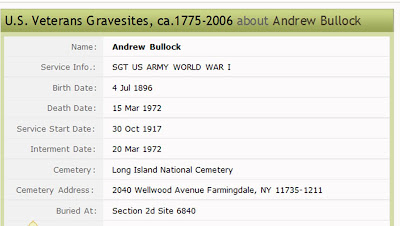 Timeline
In order to make sense of my research findings related to Uncle Andy B.’s military service during World War One, I created a timeline. 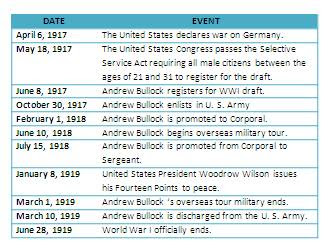 New Research Journey
World War I research is a whole new research journey for me and I look forward to the ride.  Because of locating this new military record on my Uncle Andrew Bullock, study of World War I is now more meaningful to me as a researcher and as a family member of a man who served his country and participated in this significant world event.

National Archives -St. Louis
I am preparing for a trip to St. Louis later this month to speak at the conference of the St. Louis African American History and GenealogySociety (STL-AAHGS)  While there, I hope to be able to visit the St. Louis-National Archives in hopes of finding additional information on my Uncle Andy B. and his involvement in World War I.

Posted by Professor Dru at 3:06 PM