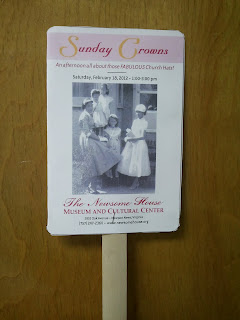 When the Curator of the Newsome House and Cultural Center suggested that the programs for “The Sunday Crowns” event be printed on church fans, I agreed enthusiastically. She had attended an event where the program was printed on a hand fan. I had no idea as to the beauty of the final product, but I thought the fan idea was appropriate for such an event.

Hand church fans typically used in African American churches are on thick cardstock paper and a stick like the type a doctor uses as a tongue depressor. On the cardstock, there is typically a photo on the front and advertisement of a funeral home on the back.

Use of these hand fans conjures up a whole host of memories. During my childhood in the 1970s, many of the fans might have a photo of Dr. Martin Luther King, Jr. or of an African American family dressed in church attire which included at least the mother in the family photo wearing a hat. The family on the photo was usually a mother, father, with two children (a boy and girl). My church had air conditioning, but hand fans might be used during those in between seasons where it was not warm enough to 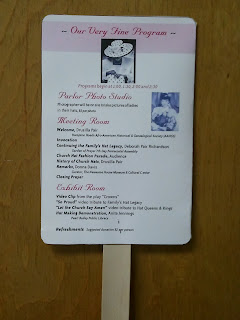 turn on the air conditioning. Some of the rural churches within our church organization did not have air conditioning and during hot and humid summer Sundays, a sea of rapidly moving hand fans filled the sanctuary as the congregation struggled to be attentive to the service amidst the heat. Over time, the cardstock on these hand fans would become bent. During these times, parishioners would motion for the usher to give them a better fan. However, at times there were not enough hand fans to go around so you would either use the bent hand fan as best you could, the church program to fan yourself, or just use your hand. This was especially uncomfortable during those hot and humid non-air conditioned churches.

Church fans are also used by ushers to calm down its parishioners who “fall out” or “get happy” during services. In charismatic type churches, people are extremely lively and might express their joy in praising God by hand clapping and dancing. Some parishioners get so overcome in their expressions of praise to God that they “fall down on the floor in a trance-like state. Others might express their praise by crying, dancing, hollering, and/or speaking in tongues. It is common for ushers and other members of charismatic type churches to be seen surrounding a “God-Praiser” with someone waving a ‘church fan’ in the direction of the person who has fallen out on the floor or the one who might be seated or standing while praising God.


Thanks to B. J. Smothers and Art Thomas for use of your hat photos.
Posted by Professor Dru at 5:45 AM

I've been to many old churches that used these church fans. What a wonderful idea to incorporate this into your program. Thanks for the memory!