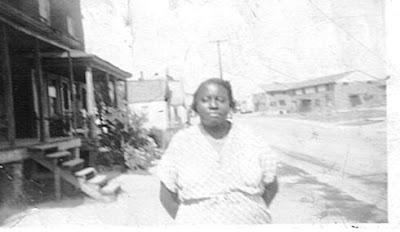 “The Help” book and movie is bringing out a multitude of emotions—good, bad, and indifferent. My maternal grandmother openly talked about her experiences as “the help”, but she referred to this employment as “day work.” I am proud that she took the time to share such a rich oral history through her stories about being “the help”. The point of many of Grandma’s “the help” stories was to teach us about life and it’s challenges.

Through Grandma’s “the help” stories, I learned about racism, budgeting, motivations for migration, and about challenges in life. Grandma frequently recalled various racist comments made by some of her employers and having one job working as a live-in maid where she had to sleep on the porch with the family’s dog.

During the early 1940s, my grandmother moved from Ridgeway, NC to Richmond, VA where she lived with a maternal Aunt and worked as a Domestic for white families. Later she moved to Washington, DC around 1942 for better wages before getting married in March 1943 and settling in Newport News, VA. Through these stories, I learned about her motivations for migration.

One of the other stories she repeatedly told my family was about how she earned $3 a week and budgeted this wage: $1 to give her aunt for rent, $1 to get her hair done, and the rest for food which was not enough for the week. This story taught us about budgeting and hard times. “I should have listened to my mama and not jumped out so fast,” Grandma would often remorse about her decision to leave home at age 19 and head for the city to get out her rural hometown. This was the story she would tell to her grandchildren and great grands who were anxious to leave home and get out on their own.

After seeing “The Help” movie on opening night, I left the theater with a smile on my face and pride in my heart for my grandmother and other ancestors who endured the abuses of segregation, Jim Crow, and working as “the help.” I know that quite a few African Americans are upset by this movie and book, however my response is to reflect on my grandmother’s life and her stories about being “the help” as well as to honor her and other known ancestors who worked in this capacity.

Irregardless of how you feel about it, author Kathryn Stockett has told her version of “the help” story through a book and film which has ignited the emotions of Americans of all races around the country. But Stockett’s story is not the one and only story, so I encourage people of all races to share their “the help” stories. There is something liberating about sharing these types of stories and we saw this demonstrated in the book and film as the black maids of Jackson, MS began to share their stories with Skeeter (Emma Stone).
Posted by Professor Dru at 8:35 AM

Thank-you for sharing, Dru. I can only imagine how tender your feeling since it has been only a short time since your grandmother passed.

I know things aren't perfect yet -- but it is amazing the changes your grandmother saw during her lifetime.

Well written, thanks for sharing.

Thank you for sharing. The writer of "The Help" was telling the story through the awakening of a White person seeing the injustices of how they treated their help. I think America is going through a time of awakening and slowly opening their eyes and hearts to the injustice and coming to terms with it.

Dru, I'm glad you wrote this. She would have been proud of you for sharing part of her life.

I read the book but haven't seen the movie yet. When I read the book I too thought about both of my grandmothers who worked as "the help" in Roanoke and Salem, VA. I appreciate the work ethic these women had; and the lessons that they passed on to me and others in my family from their experiences. Thank you for sharing your stories Drusilla!

Dru, I saw the movie about a week ago. It was all I could do not to walk out of the movie crying like a baby. You are so fortunate your grandmother was so open and sharing with her stories. I can't even imagine what they were. So many stories that could be told...

Nice post about your grandmother and her memories, Professor Dru, and good points about the book and movie. I loved them both.