Yesterday I decided to visit the Pleasant Shade Cemetery in Hampton, VA for two purposes: one was to get a little exercise and the second was in hopes of locating the gravesites of distant cousins of the Pair family. I got some needed exercise, but did not locate the gravesites of my Pair family yet.

After walking around a certain section of the cemetery and taking photos of interesting looking grave makers, I decided to drive around the rest of this huge 100-year-old historically black cemetery. As I reached a dead end, the grave maker below caught my attention.

“Michaux” (pronounced like “Miss-Shaw”)---I always loved the sound of that name when I heard my grandmother say it as she talked about a minister in her community. As I looked closer at the grave marker, I discovered that this was the final resting place of the Elder Michaux and his wife that my grandmother remembered. This is quite an elaborate grave maker especially when compared with the others in this huge cemetery. The large size of this marker is what caught my attention. 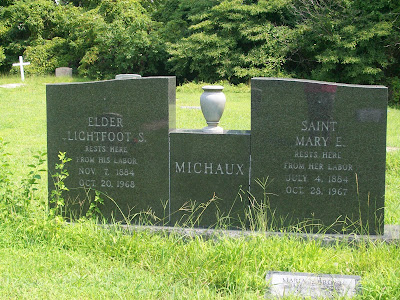 Later, I showed my grandmother the digital photos of the grave maker. She was surprised that the Michaux’s were buried in the Hampton Roads area because she thought that they had been buried in Washington, D.C. She commented that Michaux was the “Happy Am I” radio preacher and that he and his wife Mary looked like white people. “Happy Am I” was the song that became Elder Michaux’s theme song. Even though I didn’t think that a black preacher would have been on television during Elder Michaux’s lifetime, I still asked my grandmother if he had been on television. “Yes,” she said. I was amazed and impressed and excited about finding more information on the life of this great preacher.

Later that afternoon, I searched the Internet for more information and found Elder Michaux’s obituary listed in a newspaper index. I can’t wait to go to the library to read and copy the obituary. I also found other biographical websites and learned that Elder Michaux was not just a local preacher, but his ministry had spread worldwide, to large cities such as Washington, D.C. and that he was on both radio and television.

My best and most treasured finding on the Internet was a YouTube video of Elder Michaux and his congregation singing. Since I found it, I have played it continuously, downloaded it to my computer, and shared it with some online genealogy friends and my grandmother. As my grandmother watched the video, she commented that Elder Michaux was much younger in the video than she remembered. By the time she knew him, he was elderly and gray-haired. This would have occurred after the mid 1940s when she moved to the neighborhood of Elder Michaux’s church. Grandma also commented that the way the ladies in the audience jumped to the music was a common practice she observed in this church when she visited them at the Newport News church and at tent meetings on 16th and Jefferson Avenue.

“Do you think this video was recorded at the Newport News church? I asked her.”

You really stumbled upon an historic treasure. Your walk really turned out to be quite an adventure. I really enjoyed the Youtube clip and learning about a bit of Black History I knew nothing of. Keep up the tremendous work, your travels are very benefical to all of us. Thank you!

That's a great find! I don't think that's the church in NN either, but I'm going to ask around about this and see who knows what. :)
Glad your cemetery walk was profitable!
Renate

This is great!
Bless you for posting it!

What a great find! I had never heard of him. He seems to be a very charismatic preacher/evangelist. Thanks for the bit of history. Keep walking!:)

There was mention of his ministry on WHRO this past weekend. It was part of a historical look at Hampton Roads. I've heard "the song" lots of times as part of his minitry on local radio. When I first heard of him some years ago I was amazed at the size and scope of this ministry. Thanks for sharing.

I am shocked to discover from your recent photo that the headstones for the Elder and his wife Mary, no longer contain the color life-like cameo styled portraits of the two that were originally posted on the headstones. When I visited it many years ago - the portraits had been vandalized by BB shots-obviously by young vandals. I reported my finding to the Church elders on 19th street, so they may have decided to just remove them-how unfortunate and sad.

May God Bless You,

It is great to see others appreciate the Founder of one of America's greatest Churches.

There is much more to this man and his doings which we are getting out there to others every week.

Here is our Web Site: www.thechurchofgodatwilliamsburg.org which you will find much more about the Elder Lightfoot Solomon Michaux.

Thanks for posting this information

This is amazing! Thank you for posting this. I am actually a descendant cousin of his and Lewis who only found out about the brothers after my Grandmother's sister passed away and stumbled upon some other relatives while helping with her arrangements. Tracing back your roots and history is a daunting task. Something I've been slowly working on for a long while. It is nice to be able to see the final resting place of someone in my family with so much positive history and accomplishment.

This is a great post, Dru. I went over to Pleasant Shade five days ago, walked and took photos of most of it, including a picture of this amazing grave stone. Today, there's an article in the dailypress. I knew I'd seen the name Michaux, reviewed the photos...one in the same! Further internet research brought me to your post. Wonderful reading. I did see a few Pairs out there. I wondered if you were related to them. Again, this is a great post, thank you!