A Bridge to Somewhere

Although I was not able to attend the Obama rally in my city on October 4, 2008, I passed by the street bridge which led to the area where he spoke. In this photo, these people had walked across the street bridge into the downtown Newport News area where Senator Obama would be speaking that afternoon.

I had been out of town on a retreat that day and the Interstate exit to my home was on the other side of this bridge. I drove through this exit around 12:30 p.m. as people were on their way to the rally. The people I saw were probably the late ones who would have been in the back of the crowd.

As I sat at the stop light after exiting the Interstate, I watched from my rear view mirror and driver's window, the masses of people beginning their walk across the bridge which was in the opposite direction of where I was driving. As I drove through the green light, to my left I saw rows of cars for several blocks and people walking towards the bridge. That's not a bridge to No Where, I thought, It's a Bridge to Somewhere. I continued my drive home wishing that I had been home earlier so that I could have attended the rally. 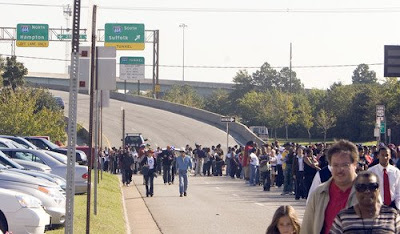 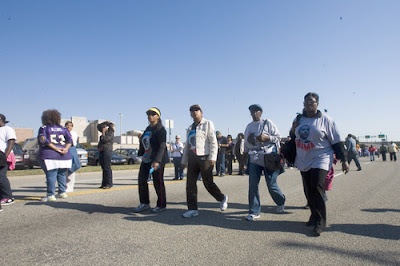 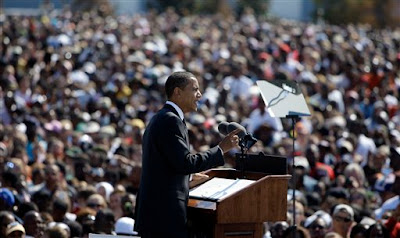 Last Saturday, October 4, 2008, Democrat Presidential Candidate Barack Obama visited my hometown. I did not get to see him, but thanks to online videos and photos, I can see what occurred during his visit. Below is a video of a portion of his speech in Newport News, VA.

Finding Church Trustees Through Newspapers and Other Sources

My great-great grandmother Luvenia Jeffress Bullock (1864-1951), also known as "Holy Venia," established a church named Veanus Chapel House of Prayer in Vance County, NC around the early 1930s. Land deeds beginning in 1941 name various trustees of this church. Veanus Chapel continued many years after Grandma Luvenia’s death. I noticed some of the same names on the deeds related to the church from transactions in 1951, 1955 and 1966.

From there, I used Internet resources on Ancestry.com to trace some of the trustees of Veneaus Chapel House of Prayer (Estora Bynum, Georgia Suitt, and Sarah Booth). Using the clue obtained from the 1962 Deed of Trust, I did a name search for these three individuals and used Durham as the locality in the query.

I immediately discovered from this Internet search that I had wrongly assumed that Estora Bynum was a woman, based on the first name. This search revealed a male named Rev. Estora Andrew Bynum (1908-1996) who lived in Durham, NC. Records found on Rev. Bynum include his death records (social security index and death record), and the newspaper obituaries of his wife Annie and their son Fred. The Social Security death index and the North Carolina Death Collection, 1908-1996, (now 1908-2004), records also listed a Georgia Suitt (1896-1981) and a Sarah Booth (1895-1981) of Durham.

Even more exciting than the above findings was the locating of the online newspaper obituaries on Ancestry.com for Rev. Bynum’s wife Annie and their son Floyd. In the wife’s obituary, she is named as “Overseer Annie B. Bynum.” Overseer is a ministerial title used in some holiness churches to describe a person who is in charge of other churches in addition to the one they pastor. In many cases, the Church Overseer is the one who has established the various churches they oversee. Rev. Estora Bynum is named as the late husband of Overseer Annie B. Bynum. A further clue from the obituary is that Annie’s funeral was held at Friendship House of Prayer in Durham, NC in May 2005. The online obituary of the Bynum’s son Floyd, who died in New Jersey in 2004, names both parents individually with the title “Rev.” in front of each of their names.

Internet clues from the North Carolina Death Collection and the Social Security index also gave me death dates for the three trustees, which enabled me to obtain newspaper obituaries through the mail from the Durham, NC Public library of the Trustees Rev. Estora Bynum, Sarah Booth, and Georgia Suitt.

The obituaries of these trustees all indicate that they had a connection to Friendship House of Prayer Church in Durham, NC. Rev. Estora Bynum’s 1996 obituary indicates that he was pastor of this church.

Sarah Booth’s 1981 obituary indicates that “she helped establish several churches in the United Holy Church religion and worked with Friendship House of Prayer.” The obituary further states that she was “active in missionary work and established many prayer bands.” The obituary also gives kinship clues between the Trustees because it names Evangelist Annie B. Bynum as Sarah Booth’s daughter. That would make Sarah Booth, one of the trustees named on deeds of Veanus Chapel House of Prayer, the mother-in-law of Trustee Estora Bynum, who was also named on the deeds.

The 1981 obituary of the third Trustee named on the deeds, Georgia Suitt, is very brief, however, it does reveal that she was associated with Friendship House of Prayer and that her funeral was conducted by Rev. Estora Bynum.

Needless to say, I am thoroughly excited about these discoveries on three of the Trustees of my ancestor's church, Veanus Chapel House of Prayer. I suspect that Friendship House of Prayer may have been the former “Veanus House of Prayer.” I plan to write the church regarding my research and ask for information on their history. I hope to also find people in this church who are either descendants of the Bynum, Booth, and Suitt families, or who would remember any of these individuals. I also hope to visit this church before the end of the year.

Written for the Carnival of Genealogy
Posted by Professor Dru at 9:43 PM 1 comment: